Where the Boys Are…. 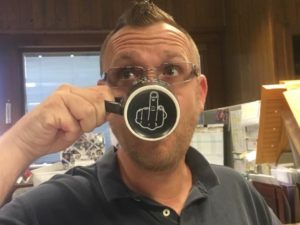 Lights, sounds, and smoke billowed at The Stonewall. Deborah Cox and Tamia remixes fill the room and everyone with (and without) the slightest sense of rhythm flock the dance floor. The space was tight and you couldn’t help but wonder if the guy who kept bumping into was trying to make a pass, or just make it past.

The Stonewall wasn’t the only place, for us ‘mos, we had options. Diamonz and Candida’s were also busy bars in the valley – offering a safe place for the LGBTQ community to meet up, catch up, chat it up, dance it up and give it up to the karaoke gods.

This was nearly 20 years ago. Since then, much has changed for us in the valley. Diamonz and Candida’s has closed its doors. Stratus (which aimed to provide another option for the LGBTQ folk) had opened and closed its doors and rebranded itself as Chicago. The Stonewall remains as the only gay bar/club left. This is not to say that gays are not welcome elsewhere, but as far as bars and night clubs designed solely for the rainbow wavers, Stonewall is the only option in the Valley.

I’ve gone to the Stonewall a few times this year however; it no longer was the thriving place it once was. Where are the gays? Has everyone moved away, or have they simply moved on from the bar scene? Or did everyone become straight?

We can certainly attribute the changes to social media. It’s easier to catch up and hook up thru the likes of Facebook and Grindr. Chat rooms were replaced with one on one chatter without the static caused by loud music, catty drag queens and drunks hovering over the billiard tables.

Perhaps the coziness of staying in or just inviting some friends over for Netflix is more appealing than going out. There is nothing wrong with this mind you, as I’m admittedly one who prefers binge watching and Doritos.

The Stonewall had changed since I was a wee 20-something. Upstairs, for example, the pool tables were moved, the place had been repainted and they’ve also gone nonsmoking. I’m not thrilled with the nonsmoking route, however, I understand the need to do so. Despite these changes, the crowd seems to have dwindled.

Perhaps gays don’t need a “place” anymore like we once did. Perhaps we are more accepted now than we had been. Perhaps we’ve now assimilated into society as individuals that we are no longer needing to assimilate as a group.

But just in case I’m wrong, there are still gay bars within driving distance – we have Rainbow Mountain up north, The Woods Campground, The Raven and New Hope Lodge down in New Hope, and of course Philadelphia’s clubs are still an option. But there’s something to be said that the Lehigh Valley once offered plentiful options for us, and now we’re down to one.

But onward and upward- we are still lucky to have Jack’s bartending skills. Karaoke is still fun (did he really sing “Rainbow Connection” with a Kermit impersonation? Love it!) and on the plus side, there’s more room on the dance floor.

But, I do miss the energy and excitement and the music (the 2000’s remixes kicked ass). I also miss the socializing in a crowded room and wondering “is he eyeing me or – oh, him. Yeah definitely him.” And while I’m having my “back in the day” moment – Zima with a shot of Chambord was some good shit.

Brian Wendt is a lifelong resident of the Lehigh Valley. He holds a BA in Speech Communication from Kutztown University. He has taken comedy writing courses with The Second City in NYC and is currently active in the Lehigh Valley’s theatre circuit.

Join our newsletter for free